Wayne O’Toole is a Northside Changemaker 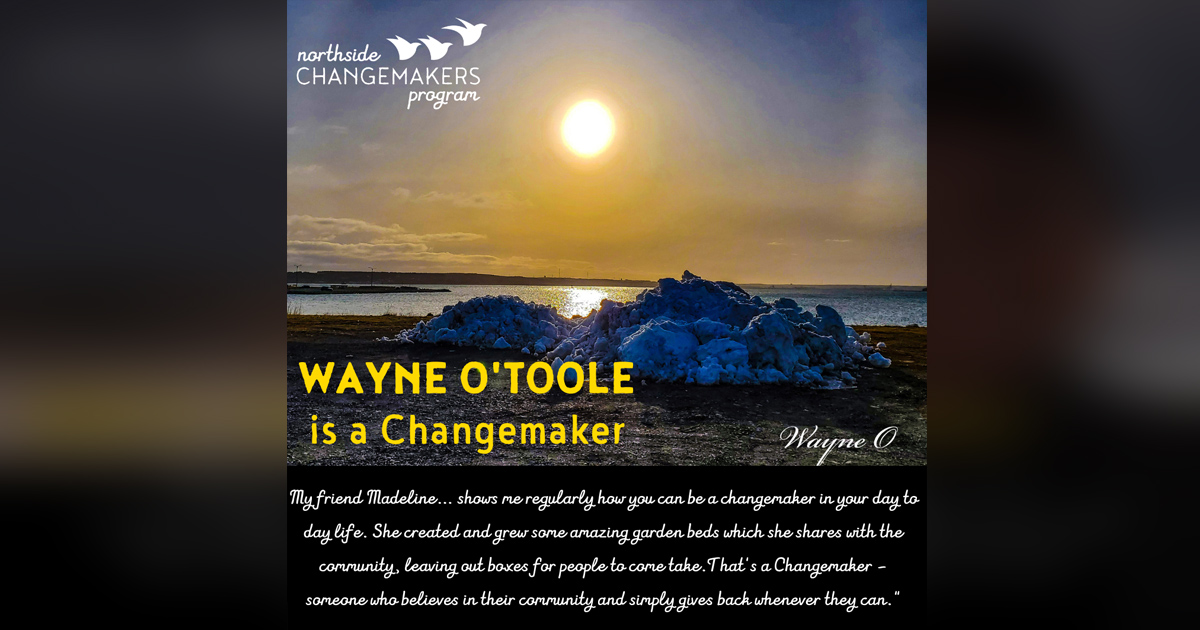 1. Tell me a little bit about yourself.

Who am I? Hippie, lefty, just someone who believes in my community and  wants to see some positive change so we can have peace as a community.

I grew up on an urban farm in Sydney Mines. My great grandfather was a potato farmer, and my grandfather took it over after an injury in the mines.

Career-wise, like many things, has been a long, winding road. I started in electronic engineering. After graduating I began working in the  surveillance field. I worked at the Casino for years. I knew it wasn’t what I wanted, but I wasn’t sure what the next step was. I had the vision, but not the ability to get out.

I had an awakening in 2011, after winding up in the hospital for twelve days in rough condition. As I like to say, “Sometimes the universe just kicks you in the ass …” I began my spiritual journey after that, beginning with a 7,000 mile journey which took me to over thirteen States, eventually landing in  Hopi Village and learning much from the brilliant people there. I was afraid for a long time. Nobody outward would ever have known, but with time, experiences, and a touch of extra wisdom I am not afraid of much any more.

Since then, I’ve spent years working as a mental health advocate,  while battling my own mental health issues. That’s when I knew that things were not changing, and maybe I could be part of that change.

I can now say that after all of those tumultuous years, I am happily settled with my wife, three dogs and a cat, living by a mantra of mindfulness, continuous learning and growing.

2. Tell me an interesting story about yourself?

I grew up with a pet raven and a monkey! My grandfather took in animals and Willy ( the monkey) was saved from the circus. Willy smoked cigarettes and occasionally visited the bar with my uncle.

3. How did you hear about this program? What drew you to applying?

My friends and fellow Changemaker, Natalie, suggested it. I have been trying to set up cooperative projects/ societies for a while.

I have been working on self-exploration and my mental health journey for the last while, and part of that was going for mindfulness drives – simply driving around and finding pockets of beauty in light and spaces.

It was on those drives that I kept seeing these abandoned and unused spaces and started having visions about how we ( as a community) could use them.

I have been seeing these ideas in my head and I’ve been working on pulling them out, and then the Changemakers program presented itself!

4. What do you love about the Northside? What makes it special?

It’s home, it’s where I grew up and where all my memories are, my roots are dug deep.

The house my mother lives in has been in my family for generations, and one day I will live there again.

The Northside has its own pace, one I have grown accustomed to. It’s quiet and mostly a housing community.

5. When you think of the word Changemaker, does anyone you know come to mind?

Changemaker, or changemaking is hard to define…it can be so broad, but I like to think that it can be big or little things.

My friend Madeline shows me regularly how you can be a changemaker in your day-to-day life. She created and grew some amazing garden beds which she shares with the community, leaving out boxes for people to come take. That’s a changemaker – someone who believes in their community and simply gives back whenever they can.

As well, a sense of community is changemaking, we have lost part of that and lost our broad sense of community. There used to be places to go, essential services provided, jobs available, church groups actively giving back. We need to work towards building that up again.

What about “Changegroup”? Because let’s face it, we are all better together.

6. What are you hoping for the Northside? Why is that hope important to you/ the community?

I am hoping for new life and new opportunities. Like I mentioned, we are such a special place and we deserve so much more.

I am hoping for more opportunities and spaces for people: to be creative, to have options. I would love to see community owned cooperatives, better transportation, accessible wellness services…places where everyone can be a member, which offers ways to be creative and productive.

You’re called to do something brave, but your fear is real and stuck in your throat. What’s the first thing you do?

Reach out to someone else, I have a pretty good network! The more hands the better.

What is something that people often get wrong about you?

That I’m angry, because I have had angry reactions in the past. My brain is just different, and my PTSD has it wired differently. I am so much more than that.

What’s the last show that you binged and loved?

I have to name at least two! Better Call Saul and Breaking Bad.

Give us a film you really love?

Again, I can’t pick just one!: What Dreams May Come and Life of Pi.

What’s on your nightstand right now?

Give us a snapshot of an ordinary moment in your life that brings you great joy?

Meditating, finding a quiet spot, putting on headphones and just turning off my brain. That took me a long time to learn, and it’s something I value the most.

What is the one thing you’re deeply grateful for right now?

Everything, that’s something I learned through the years; everything has purpose or is there to teach a lesson. There are huge opportunities coming.